I had a garlic naan left over from yesterday afternoon's lunch. So, inspired by this recipe, I decided to have a slice of Indian-style pizza and make it a healthier version of the original recipe. Plus, I get to use up some of my damn vegetables (Such a mistake buying so much, but hate having it go to waste!).

To make, you'll need a half or quarter of a naan (depending on the size of the naan bread). Basically, each serving of your pizza will be one sliver of the naan - If you have a big round naan, cut it into quarters, and so on.

Mine was a day old, which was just fine with me. 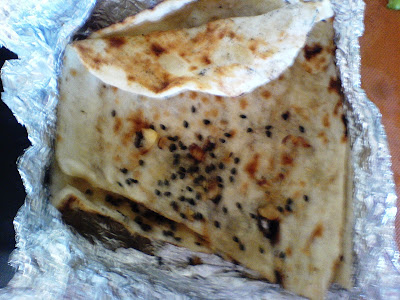 On this, I used a base of green chutney - which is similar to pesto, except its made of coriander, green chillis, coconut flesh, and some herbs. I didnt make a fresh batch, it just happened to be lying in my refrigerator made by my mom. Here's a nice recipe for green Indian chutney. You could use pesto.

PS: In the original recipe, the breads look more like tandoori rotis, not naans. I'm Indian. I would know.

Ingredients:
To make:
On a sliver of the naan bread, spread the green chutney all over. 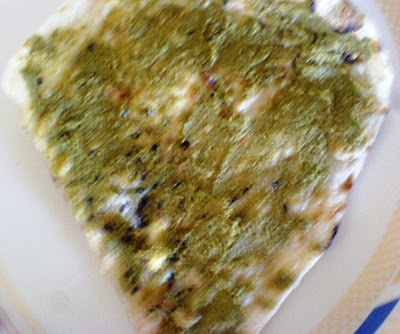 Then, lay some green leafy vegetables, then the peppers and cabbage on top.﻿ Then the olives. Splash on some olive oil and a dash of dry basil. 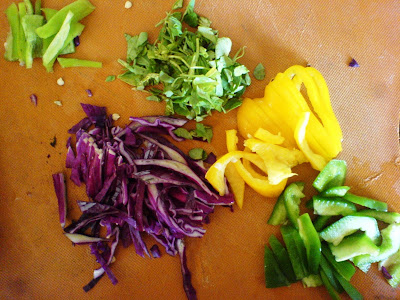 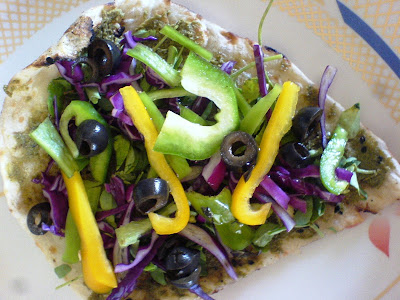 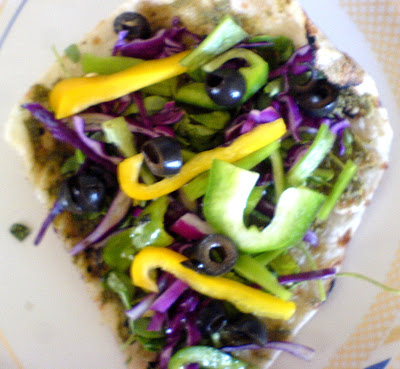 Finally the sunflower seeds for crunch. 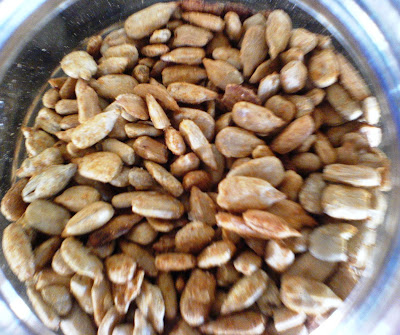 Bake in the oven at around 250 degrees celcius for around 15-20 minutes. 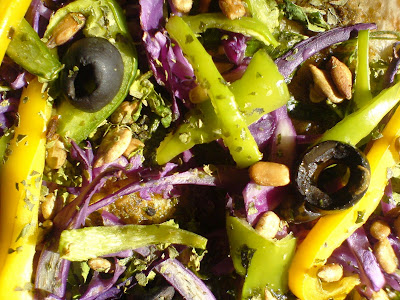 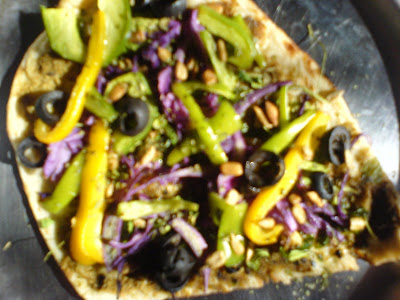 You can either have it as a pizza or roll it over and have it as a wrap. And yes, I'll admit, its not really a pizza - seeing as there was no cheese (or vegan substitute for cheese) or tomatoes.

I have to say, I really, really enjoyed eating this one. I still have a quarter of a naan left over, which I will use for another pizza - This one with Tahini paste as the base (should go well with the garlic in the naan), and sliced eggplants and some veggies for lunch. Mmmm. Can't wait!!﻿
Posted by Raw_Girl at 11/30/2010 10:54:00 AM