Two Awards and Time to Give Back

Having received a couple of blog awards over the last month, I guess its my time to give back. Thanks a lot, Heather and Mateja. Why the delay in this post? Because I didnt really know how these bloggie awards work! :) I thought I was just a "nominee" and was waiting for a "winner" to be annouced.... 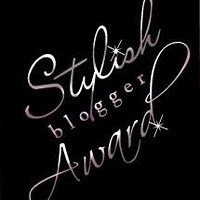 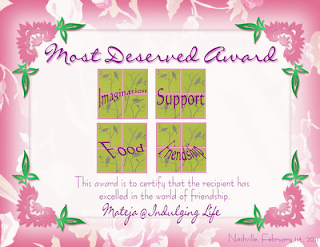 On to the job at hand....
Make a post and link back to the person who awarded me. - Done 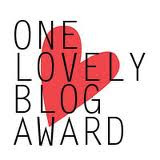 Email ThisBlogThis!Share to TwitterShare to FacebookShare to Pinterest
Labels: Awards

awww thanks so much :) stylish blog award right back at ya! i love all your raw food posts!

Thanks so much for the award :)! I enjoy your blog as well! The bread pudding in your previous post sounds amazing!

Thank you. This may take me a while but I will eventually get to it.

Thank you, sweetheart!! I really appreciate it... what an honor!

Thank you very much for the award :) it's a nice surprise :)
Im just wondering where do you keep all those your magazines :)))

Thank you so much for the award! I'll put it up tomorrow. :-)

What a cute/delicious blog you have!

Awards well desreved for frshness you bring with your posts, Father's Pride! Cheers and have a great day :)

Nice to learn more about you...plus fun to visit the blogs you've awarded :)

Thank you so much for the "One Lovely Blog Award". It has been a lot of fun looking through your posts and I feel the same about your awesome blog:)

Thank you so much for the award! :-) And one lovely blog award right back at you ;-)

Thanks, Rawgirl. Keep up the good work!