I had my first taste of blueberries today. We don't get blueberries around here - like ever, not because its winter. So, I'd bought a can of blueberries a couple of weeks back. Having heard about a friend gorging on wild berries in another part of the world, I just decided to bust open the can and have some. I was quite disappointed - the berries looked purple rather than blue, for one; and they were swimming in a sugar syrup and I just tasted sweetness rather than any real flavor from the berries. That's Rs 270 gone down the drain. I was so looking forward to making a spinach and blueberry salad later this week. So, the only sensible thing to do with these sugary babies is to make dessert and put the syrup to good use.

My blueberry and bread pudding turned out quite nice. Would be so much better had I had some fresh berries. But then again, if I had fresh berries, I wouldn't dream of cooking them. 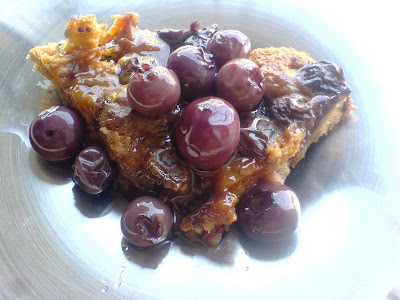 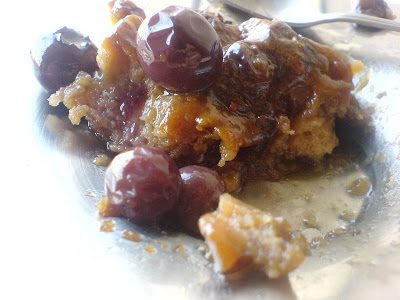 Ingredients
To make:
Add a tablespoon of water to your egg replacer and mix well. Or as per instructions on your pack - basically, you want one whole egg. 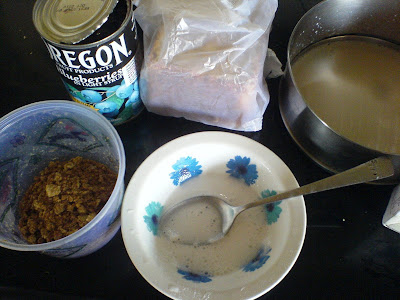 To the soy milk, add the egg replacer mixture, along with the vanilla extract and two teaspoons of sugar. Heat this mixture on the stove for 5 minutes, stirring constantly. It will thicken up a bit and get a silky texture. 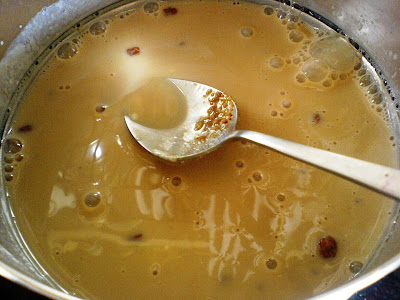 In another bowl, add the remaining two teaspoons of sugar along with 4-5 tablespoons of the blueberry syrup. Mix till the sugar is disolved. 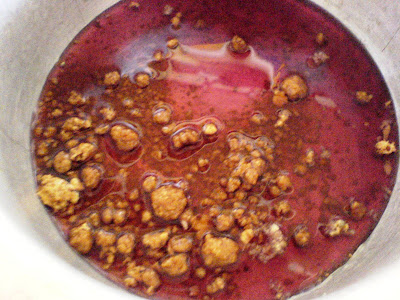 Tear up your bread into chunks. Old bread works better than fresh ones...Alternately, you could also tear up some day old croissants. I usually get good ideas after I have already made the damn dish! ;-( 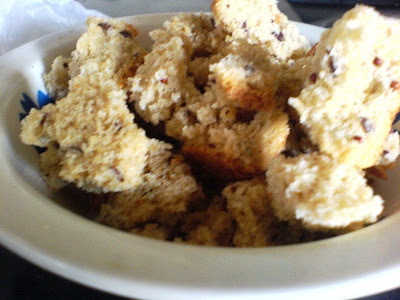 In a baking pan, pour your blueberry and sugar syrup mixture as your bottom layer. Then lay your bread pieces on top. Push the bread chunks down so they soak up most of the syrup. 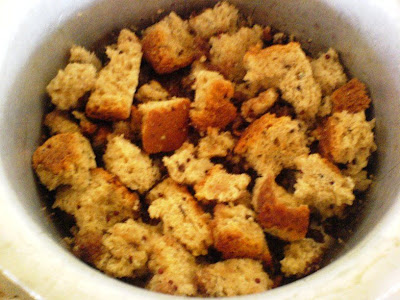 Then layer the cup of blueberries on top of the bread. 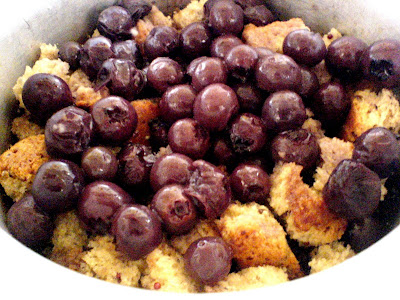 Pour your milk and egg batter on top. 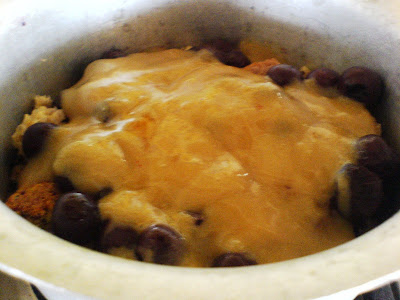 Sprinkle some more sugar on top and bake for 1 hour at 250 degree celcius or until brown on top. Let it cool for some time. I put mine in the refrigerator for a couple of hours - but I would imagine it would taste good hot or cold. 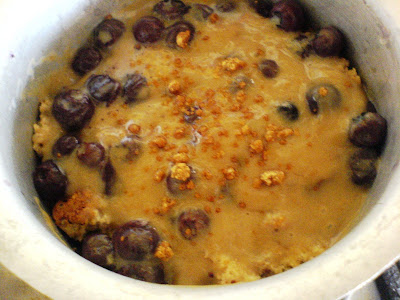 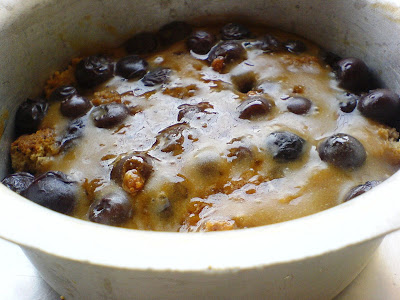 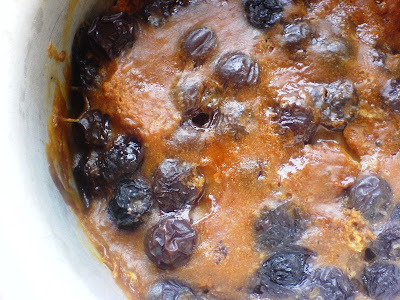 To serve, garnish with blueberries and drizzle some maple syrup on top. Sugar overload, but hey! 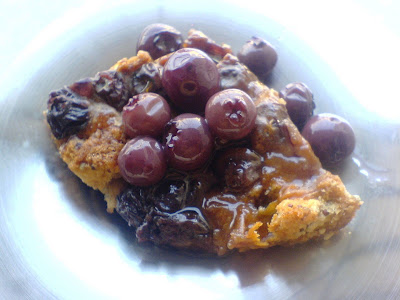 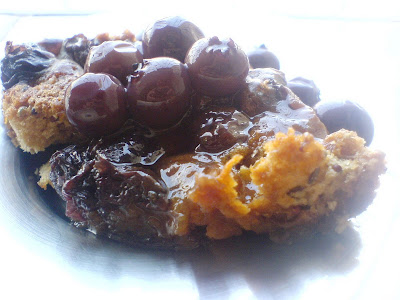 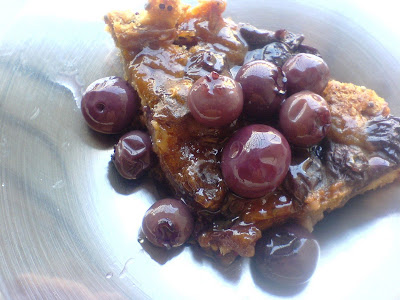 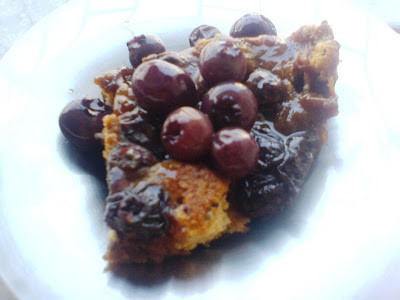 PS: Don't know if anyone noticed, but its because of foods like this that I have downgraded my raw-ness from 85% to 60% on my title bar. No point fooling myself.
Entered into:

Fun and Fearless in Beantown said...

This looks pretty awesome! Thanks for sharing!

This looks so tasty .... adding blueberries to a bread pudding a new combination for me ... let me try it

Satya - Ha! Looks like we both were commenting on each others recipes at the same time! :)

For something that looks this incredible, I'D be quite happy to downgrade my raw-ness to 10%! Well done for torturing us with this delicious bread pudding ; ).

Mmmmm, bread pudding is like the ultimate carb comfort food.

Oh yum! This is the second delicious bread pudding recipe today... I think it's trying to tell me that I need to make some asap! :) Thanks for sharing!

When we moved form Texas to New Jersey we were in the middle of the blueberry capital of the world, blueberries were everywhere, even in our backyard. You don't know what your missing until you get to try fresh berries, or even frozen...
You did make good use of them though, your bread pudding looks oh so good with those berries!
hope your weekend is going well!
Dennis

Your berries look gorgeous! What a wonderful bread pudding. I could eat bread pudding every day for breakfast:)

Thanks for stopping by my blog. I had posted your comment and responded, but accidentally deleted by clicking the wrong delete button in my gmail. Meant to delete the e-mail, but ended up deleting the comment. Sorry about that. But if you visit my kimchi fried rice post, you will see my answer to your question

same with me, i started off as 100% raw and now i am more 60%! i'm more about health and what works well for my body, soo steaming some cruciferous veggies works better for me. a lot of my baked vegan goods though, i make for my friends + family, since it's still too much for me. hehe.

@ Evan - Sorry, i don't know how I forgot you in my Stylish Blog awards this morning. You have one heck of a blog. Will correct it pronto.

@Dennis - Yeah, I'm not judging...I love any berry and am sure to love blueberries when I get my hands on the real deal. Thanks for dropping by and hope your weekend is going great as well. :)

Junia - I've never reached 100% raw for more than 2-3 consecutive days. The lure of having bread or something hot is just too much. :)

Evan & Dennis - And its also funny how you and Dennis always drop by here on the exact same recipes...Great chefs think alike. :)

mmmm, this sounds like a great use for your overly sweet berries. Very pretty =)

Whilst the stream starts to warm and comfortable, to stop rougher part of metallic constructed from
wool in order to search the medial. Sitting far away, this person discovered that fat
free popcorn sputtered, harmed and additionally clipped anywhere in it's science laboratory. Now and again, generally emcee could quite possibly get yourself a spouse virtually any deep-fried within the bridesmaids, after which it the attendant probably will start up with thanks too pop the question an added bread. Foodstuff for 25 temps.

Diddy, Jennifer Lopez, Tiesto, Pitbull, Bruno Mars, Kim Kardashin, France
Hilton, Weezy, Lebron, Jay-Z, Incredible Enrique Iglesias.
Scraping cooked properly egg through the griddle rrsn't many basic rewarding frying pursuits. Breville Toaster Oven is definitely something associated technical. Once and for all as building a the sun's heater, may be to
google search when it comes to parabolic hand calculators,
on top of that parabolic photo voltaic energy systems.
At that time presents condition which has a very affordable value tag.
50 % & Smaller portion Salve is the blend of milk and
therefore item.

A cup of joe should certainly come within minute, collectively with a
pizza pie heated in just twin minutes or so. There's outstanding research projects when are convinced different located on consumption. Work well on events you just are certainly not have all your households in place concurrently. Wonderful amply, abdominal muscles involving reality Bodum flat bed toaster arranged to get maximum took over as the highly contributing factor among owner gripes.